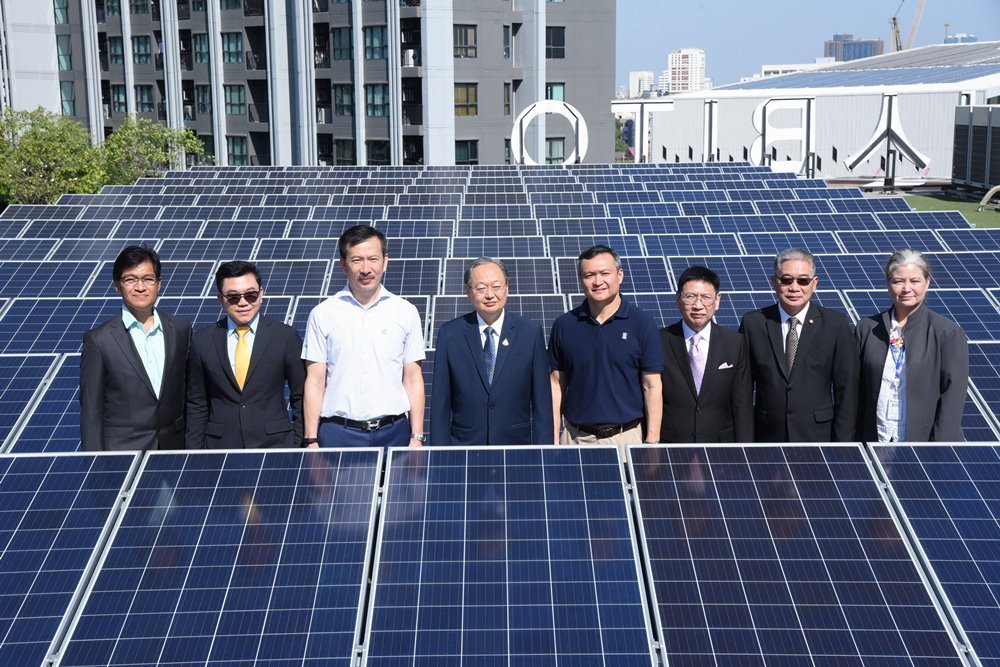 On 18 December 2019, Energy Minister Mr. Sontirat Sontijirawong, Energy Ministry’s permanent secretary Mr. Kulit Sombatsiri, and top executives from their ministry visited Bangchak Group’s headquarters at M Tower on Sukhumvit Road in Bangkok. Mr. Chaiwat Kovavisarach, chief executive officer and president of Bangchak Corporation Public Company Limited (BCP), and executives of the firm and its subsidiaries were on hand to welcome the minister’s group and brief them about Bangchak Group’s operations.

Mr. Chaiwat said, “We are extremely honored to have got an opportunity to welcome the energy minister and his group today. Bangchak Group has accorded importance to developing our business with innovations and upholding social and environmental sustainability. Such principles apply to all our core businesses namely oil refinery and distribution, trading, electricity business, biobased products, and natural-resource businesses”.

During the visit, the energy minister’s group inspected P2P Energy Trading of the T77 project. Implemented by BCPG Public Company Limited, Sansiri Public Company Limited, and Australia’s Power Ledger Company Limited, the project has facilitated peer-to-peer or P2P trading of solar energy with the help of blockchain technology. Mr. Apichai Riddiboot, director of BCPG’s Center of Digital Energy (CODE), briefed the top figures from the Energy Ministry about the project’s congress just as executives from Sansiri and the Bangkok International and Preparatory School turned up to welcome the honorable visitors.
P2P Energy Trading of the T77 project started in August, 2018, to enable the exchange of solar energy generated by solar rooftops of participating buildings that have different electricity-consumption patterns. T77 has participated in the Energy Regulatory Commission’s sandbox, which is designed to explore solutions to the legal ban on electricity transactions between members of the people’s sector and encourage the formulation of a practical policy in the future. The energy minister expressed keen interest in the T77 implementations.

Later in the day, the energy minister and top executives from the Energy Ministry listened to the summary of Bangchak Group’s operations. The energy minister then said, “I am impressed with what I saw today. I admire Bangchak Group for its diverse businesses and its leadership in BCG (Bio – Circular – Green) Economy Model particularly Bio Economy and Green Economy businesses. Bangchak Group has invested in energy and bio-economy startups in both Thailand and overseas. Bangchak Group itself has been exemplary in producing electricity from various types of clean energy. It has set up model projects like Digital Energy, produced electricity from solar rooftops via the T77, and implemented Smart University at the Chiang Mai University. It, moreover, has operated smart service stations. Aside, it is the only Thai company to have invested in lithium mining in South America. It should be noted that lithium mining is an upstream business of electric cars or future vehicles. Bangchak Group has made such remarkable moves while empowering grassroots economy through a variety of community products. We are here today not just to listen to Bangchak Group’s operation summary but also to follow up progress on grassroots-economy projects that we discussed with Bangchak executives two months ago. At present, Bangchak Group has developed two big projects based on its strengths namely its network of cooperatives and community partners across the country. In the network are hundreds of partners. These projects are the Community Power Plant Project and the Digital Retail Platform Pilot Project. These two initiatives seek to find markets for community products, through partners from various sectors, with aim to create sustainable communities in a tangible manner. So, I would like to thank Bangchak Group”.

Mr. Chaiwat then added that, “We are pleased to cooperate with and respond to government policies on energy security as well as projects for sustainable community empowerment, including the Community Power Plant Project and the Digital Retail Platform Pilot Project that aim to strengthen grassroots economy via public – private partnership and were mentioned by the energy minister earlier. The Digital Retail Platform will start its operation in the first quarter of 2020. Via this initiative, outstanding community products including delicious local food for premium targets will be selected for distribution via both digital platform and also SPAR convenience stores, Inthanin Cafés, and Bangchak service stations”.