According to Mr. Chaiwat, "Winnonie" is a part of "The Intrapreneur – Turning Our Members into Entrepreneurs" project. Implemented by Bangchak Initiative Innovation Center (BiiC), the project has encouraged Bangchak employees to apply design thinking in business development. BiiC has taken up the mission of exploring and developing new businesses, with the help of R&D, for the goals of expanding Bangchak's green-energy and biobased businesses both in Thailand and overseas.

Bangchak employees who kickstarted Winnonie conducted a study on taxi motorcyclists working around Bangchak headquarters and refinery. Findings from the study, which examined the work and lifestyle of the taxi motorcyclists, were analyzed to determine their needs and to design solutions. According to the findings, taxi motorcyclists have had high expenses with instalments for the lease-purchase of their vehicle and petrol accounting for 60 per cent of the expenditure. The Bangchak employees behind the study therefore concluded that it would be great to find a solution that would lower taxi motorcyclists' expenses, increase their income, help protect the environment, and gather travel information for further uses all at the same time.

The key goal of "Winnonie" is to reduce the debt of taxi motorcyclists, their main pain point, by leasing electric motorcycles to them. The move promises to significantly ease their huge burden from compound interest associated with the lease purchase of general motorcycles, and also to curb their petrol cost. The study shows the expenses generated by electric motorcycles are 10 times lower than those generated by petrol-powered motorcycles. Winnonie is now the first operator in Thailand to provide battery-swapping service. Participating taxi motorcyclists can conveniently swap batteries at battery-swapping machines inside Bangchak service stations.

"Winnonie" pilots in the neighborhood of Bangchak headquarters and refinery. Taxi motorcyclists in the area can lease electric motorcycles but their usage data will be gathered for three months from 1 July 2020. As taxi motorcyclists usually give a ride in a point-to-point manner, it is possible to gather data on a microgrid model. Data can also be used to scale up Winnonie's operations or make its service available in wider areas with the help of partners who are keen to develop a good ecosystem together as a community. After the three-month data collection and related analysis, Sansiri Public Company Limited and Kiatnakin Bank will join in as partners. Winnonie also aims to cover electric-motorcycle manufacturers/distributors and other organizations in its network in the future. At present, Winnonie has already won support from the Phra Khanong District Office, the Bangkok Metropolitan Administration, the Land Transport Department, and many other relevant authorities.

Dr. Suvit Maesincee, minister of Higher Education, Science, Research and Innovation, says, "I would like to congratulate Bangchak Group on the launch of Winnonie. This startup promotes electric motorcycles, which use green energy, and implements a Green Economy Model for the purpose of solving taxi motorcyclists' debt problems. Winnonie is considered a part of BCG Economy Model (Bio-Circular-Green Economy Model), a new economic driver, and in line with Prime Minister General Prayut Chan-o-cha's 'Ruam Thai Sang Chart" strategy that places an emphasis on uniting all sectors in efforts to strengthen Thailand and connect it to the international community without leaving anyone behind".

"BCG Economy Model presents a holistic approach to economic development. It focuses not just on economic development but also social development and environmental care in pursuit of security and sustainability in all aspects. I am delighted to see Bangchak Group shine as a leader of BCG Economy Model after having constantly developed its businesses with various methods. I hope Winnonie will be able to fast expand, evolve into a commercial business, and contribute to Thailand's sustainable Green Economy," he adds.

Mr. Uthai Uthaisangsuk, chief operating officer at Sansiri Public Company Limited, says, "Sansiri is immensely pleased to have played a role in building a Green Community alongside our partner, Bangchak. The move resonates with Sansiri Green Mission to create a sustainable green community. Sansiri is now set to become the first real-estate developer to integrate Winnonie's electric motorcycles for its residents. Interested residents of T77 will be able to use the electric motorcycles via Sansiri Home Service Application in October. Not only that the initiative will give T77 residents opportunities to help cut carbon-dioxide emissions from commuting, but it will also make a great neighborhood for them on a sustainable basis because taxi motorcyclists in Onnut area (neighborhood) will also enjoy a better quality of life".

"At present, Sansiri has already offered Smart Move service or electric-car rental to provide convenience to people living in T77 project. Sansiri thus hopes that Winnonie will make things even more perfect for our residents. Findings show an electric taxi motorcycle running a combined distance of 150 kilometers an hour can cut carbon-dioxide emissions by 6.75 kilograms a day. If all 100,000 taxi motorcycles in Bangkok are electric motorcycles, they will help curb carbon-dioxide emissions by more than 250,000 tons a year. Such effects are as good as growing 20.5 million tons of trees or planting trees over as many as 30,000 rai. Such wide space is about three times the size of Bang Kachao," he continues.

"As the leading greenovator for sustainable future, Bangchak Group recognizes the growing importance of electrification and 'Winnonie' supports such use of energy. In 2019, Bangchak signed an agreement with the Provincial Electricity Authority to install charging stations for electric vehicles at no fewer than 62 Bangchak service stations across the country. Moreover, Bangchak has already stepped into digital-energy business and digital technology-enabled energy service sector via BCPG Public Company Limited. Bangchak, in addition, has conducted studies to explore new business approaches such as the development of electrical energy storage system and energy management system to ensure our businesses keep pace with the fast-changing world," Mr. Chaiwat concludes. 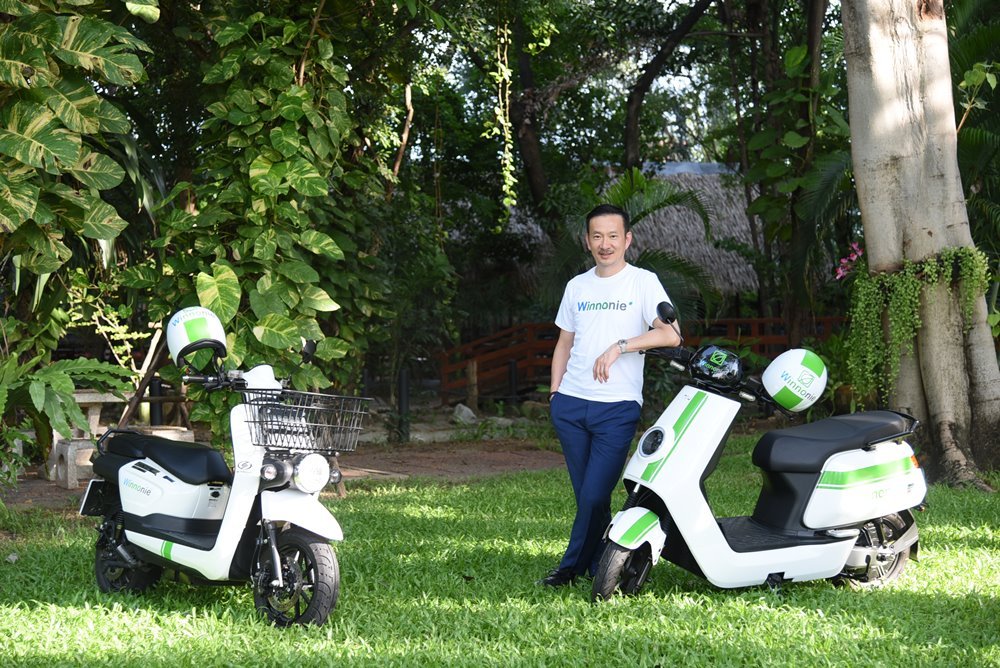 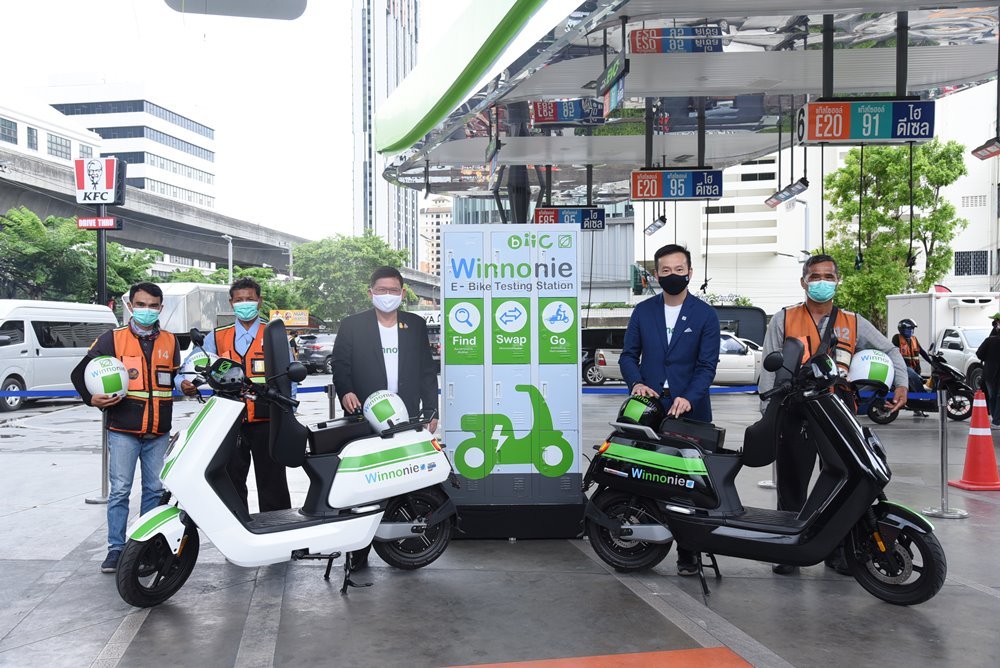 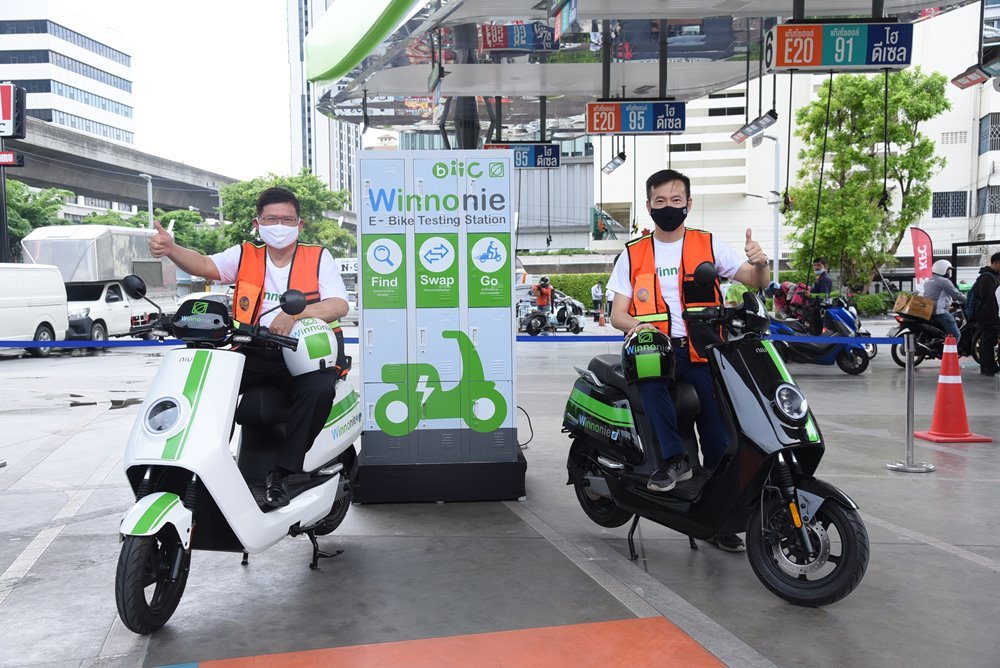