Mr. Chaiwat Kovavisarach, chief executive officer and president of Bangchak Corporation Public Company Limited (Bangchak), has recently received the Responsible Business Leadership recognition from the Asia Responsible Enterprise Awards 2020 (AREA 2020). The award-presentation ceremony has been organized by Enterprise Asia, which independently supports, promotes, and empowers socially and environmentally responsible businesses in Asia for sustainable-development causes. To date, Mr. Chaiwat has been one of the first two Thai winners of such accolade. The award has been conferred to Mr. Chaiwat because he has outstandingly transformed Bangchak into a greenovation group for sustainable future. Not only that the transformation goes well with global trends, but it also underlines Bangchak’s unwavering commitment to operating its businesses with social and environmental responsibility.

“Stepping into its 36th year, Bangchak is now recognized as the greenovation leader that is socially and environmentally responsible. Our businesses have always kept pace with the changing world and pursued sustainability. Our five core businesses are: 1) Refinery and Oil Distribution Business, which operates a modern and eco-friendly Complex Refinery. It is fueled by natural gas that is clean from its origin and throughout its cycle. Every liter of Bangchak petrol therefore is friendly to the environment. Certified based on international standards, it does not cause pollution. Bangchak petrol, moreover, has won Carbon Footprint and Carbon Footprint Reduction labels from the Thai Greenhouse Gas Management Organization; 2) Marketing Business, which operates most distribution channels of Bangchak’s products via more than 1,200 Bangchak service stations, now embraces Greenovative Product concept. It places an emphasis on improving product quality in response to customers’ needs and being green. Thanks to its initiatives, Greenovative Service Stations have been launched with prominent features and more of Bangchak service stations have EV Chargers, bigger green spaces, and better facilities such as toilets that are friendly to the elderly and the physically challenged. Greenovative Mind is also highlighted as the Marketing Business deploys information technologies in managing customer data for service development, the delivery of faster and more efficient services, member-database improvement, Point of Sale Automation system, and application development to increase the convenience of all customer groups; 3) Green Power Business, operated via BCPG Public Company Limited, produces power from clean energy such as solar energy, wind energy, geothermal energy, and hydropower in Thailand, Japan, the Philippines, Indonesia and Laos. Lately, BCPG has also entered Digital Energy sector in line with global trends; 4) Biobased Business, operated via BBGI Public Company Limited, is considered Thailand’s biggest manufacturer and distributor of biobased fuel; and 5) Natural Resource Business, which has a petroleum business via shares in Norway’s petroleum developer and manufacturer OKEA ASA and a lithium-mining business via shares in Lithium Americas Corp (LAC) that has lithium mines in not just the United States but also Argentina. Moreover, we have set up the Bangchack Initiative and Innovation Center (BiiC) to create a Green Ecosystem to drive innovations on green energy and Bio-Based products that will pave way for the country’s energy security and sustainability. Bangchak has now pursued the goal of achieving Zero Carbon Emission by 2030 too,” Mr. Chaiwat says.

“I, along with all Bangchak employees, are committed to integrating green innovations to our businesses for public interests and better living conditions in Thai society. We have maintained the balance of “financial operating results” and “value” derived from our social and environmental care in pursuit of sustainability. I am pleased and honored to have won this award. Thank you, Enterprise Asia,” he continues.

Led by Mr. Chaiwat, Bangchak has scored greennovation achievements both at national and international levels as follows:

At the same award-presentation ceremony, Bangchak has won Circular Economy Leadership Award for its “Conserve & Share for Happiness” project. Under the project, emptied PET bottles of drinking water are collected via Bangchak service stations for recycling. Fiber from the process is used to produce items for public interests. For example, the recycled fiber has been turned into caps for Bangkok Metropolitan Administration’s cleaners in all 50 districts of Bangkok and volunteer cleaners in Pattaya City, plus over 12,000 caps for taskforces fighting marine debris. 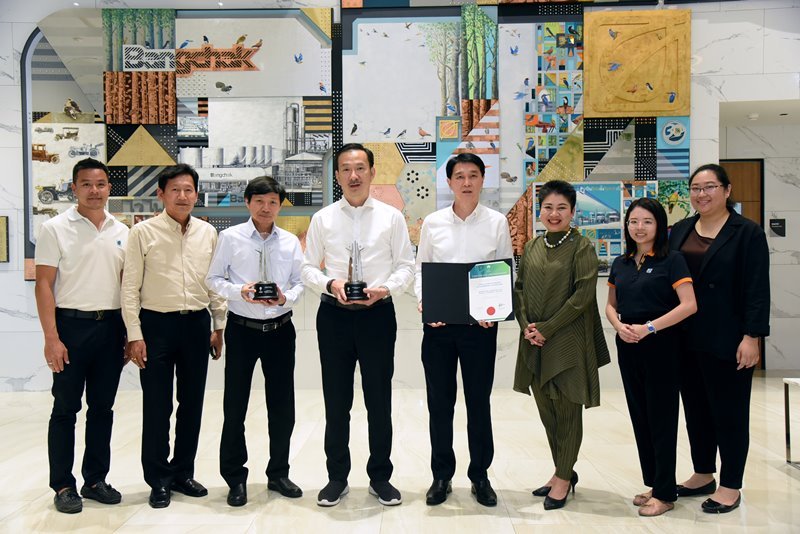 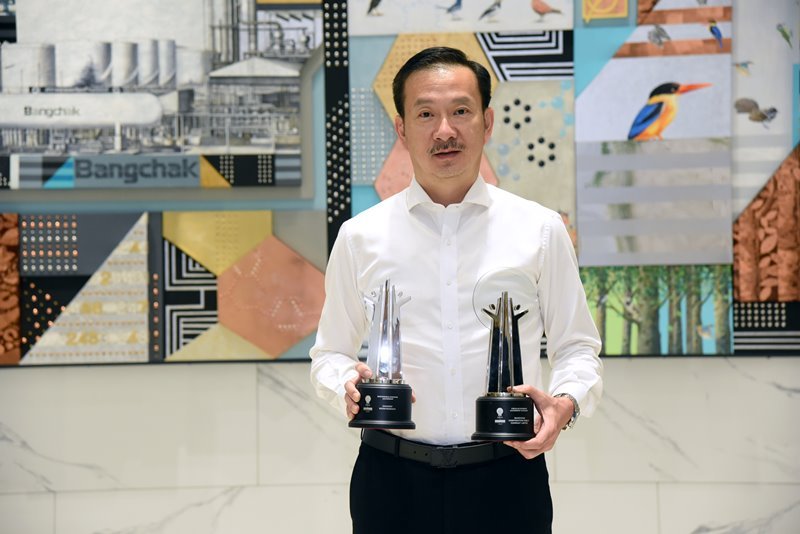