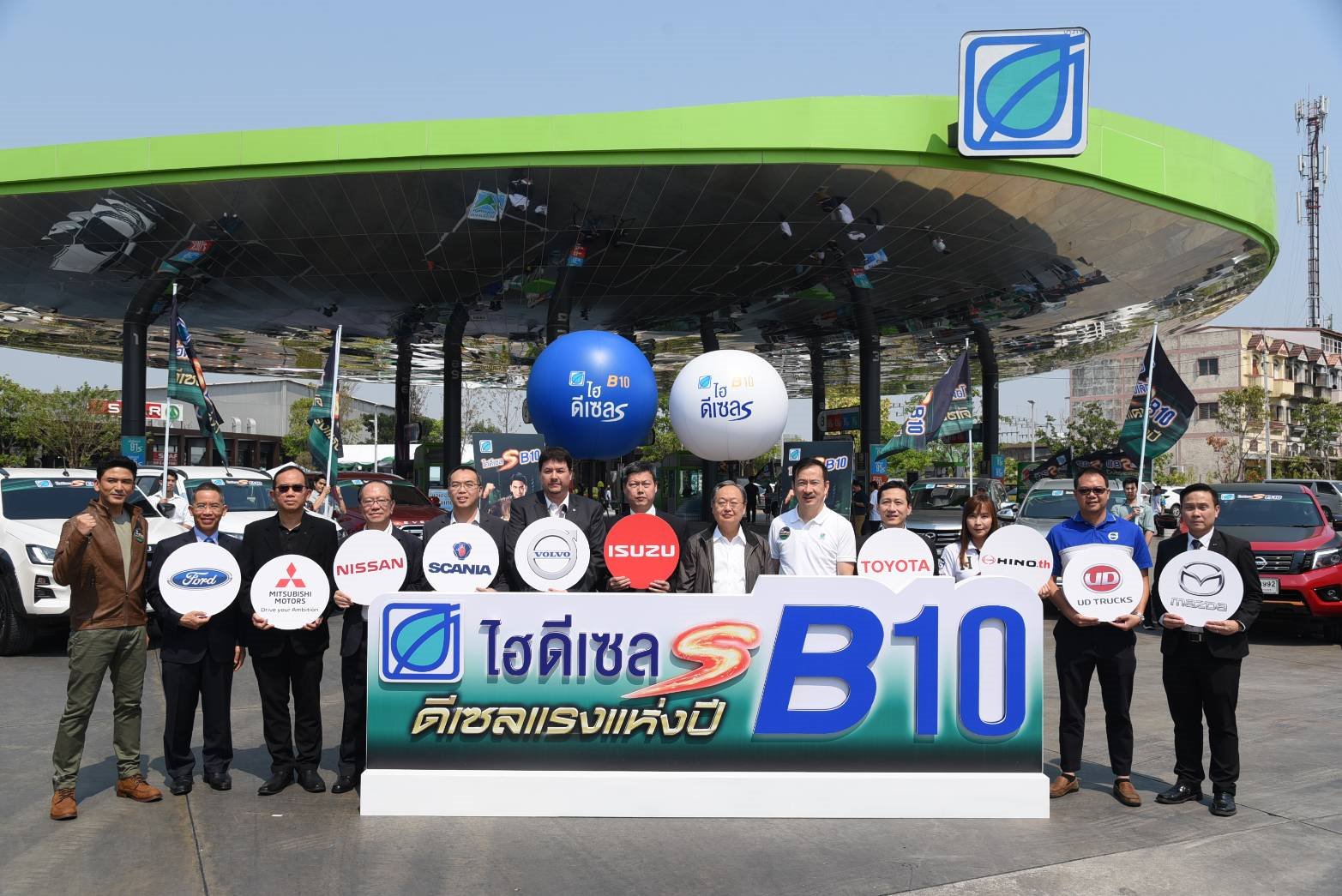 On 19 February 2020, “Bangchak Hi Diesel S B 10: Diesel Fuel of the Year” event was held at the Bangchak Service Station – Srinakharin Branch with Energy Minister Mr. Sontirat Sontijirawong presiding over the function. Mr. Chaiwat Kovavisarach, chief executive officer and president of Bangchak Corporation Public Company Limited (Bangchak), along with other executives from his firm, high-level officials from the Ministry of Energy, executives of carmakers, and famous actor Mr. Natthawut Skidjai attended the event.

Mr. Sontirat Sontijirawong, the minister of energy, says the Energy Ministry has introduced the “Energy For All” policy with aim to give everyone access to energy and ensure that grassroots people benefit from energy policies. As a result, energy mechanisms have been deployed to drive grassroots economy and solve the problem of falling crop prices. The Energy Ministry has promoted the use of crop-based fuel in support of farmers. B10 biodiesel, for example, uses palm oil in its production while E20 is the gasohol that actively uses sugarcane and cassava as its ethanol. The ministry, in particular, has promoted B10 as standard diesel fuel in Thailand and pursued the goal of making B10 available at all service stations across the country from 1 March 2020 onward.

The promotion of B10 has delivered tangible satisfactory results. Not only that it has stabilized palm-oil price but it is also good to the environment. It reduces the amount of small dust particles like PM2.5. Moreover, B10 saves consumers’ money because thanks to the Energy Ministry’s policy, it is Bt2 cheaper than B7 per liter.

The Energy Ministry asserts that the use of B10 does not have any adverse impact on compatible engines, which are specially designed by carmakers. Consumers who are interested in B10 should consult the list of compatible car models that is released by the Department of Energy Business. The Energy Ministry, in addition, monitors and checks fuel quality at both manufacturing line and service stations so as to assure consumers that B10 is of good quality. Mr. Sontirat adds that he would like to encourage people to embrace B10 because it is a way to help palm farmers and ease air pollution.

Mr. Chaiwat Kovavisarach, chief executive officer and president of Bangchak Corporation Public Company Limited, says his firm has constantly developed its businesses through technology and innovations for the purposes of giving Thais clean energy, particularly biofuel, that is both functional and environmentally friendly.

Bangchak ranks among the first energy firms to manufacture and distribute alternative energy from gasohol and biodiesel groups with aim to help buy agricultural crops for Thai farmers’ better life. The firm, moreover, has developed quality fuel in line with EURO 5 standards to ease smog problem and give a better environment to Thais. In its latest move, it has developed “Bangchak Hi Diesel S B 10” that is now available at more than 400 service stations across the country. The number of service stations with this new fuel choice will also keep increasing.

Bangchak Hi Diesel S B 10, which deploys Green S technology, is outstandingly powerful and clean. Quality additives like S Super Booster and S Super Purifier in this fuel promise to keep vehicle engines clean, prevent clogged nozzles, and boost cetane number. Combustion is thus perfect, enabling engines to work at their full performance. Every ride as a result is smooth and energy-saving. Bangchak Hi Diesel S B 10 is suitable for both small and large vehicles. Importantly, it can help reduce smog problem including the one involving PM2.5. On top of these many benefits, every liter of this new fuel choice is Bt2 cheaper than B7 biodiesel thanks to the Energy Ministry’s policy.

Mr. Chaiwat says to spur the use of B 10, his firm focuses on fast expanding distribution channels and marketing communications. Mr. Natthawut “Poh” Skidjai, a user of diesel fuel, has been recruited as the presenter of this new product because he understands the needs of diesel engines. Marketing communications will use all types of media such as TV, radio and online media, and include marketing events to boost public awareness of B 10 quality and encourage diesel-car users to try this new fuel choice. For example, “Full Tank, Half Price” campaign will run from 25 to 28 February 2020 at four Bangchak service stations that are located in four key suburban corners. More events will also roll out throughout 2020 in support of this new biodiesel.