Chiang Rai: 26 August 2021, Oolong Meeting Room, Chiang Rai City Hall, Governor Prajob Prachsakul headed the press conference regarding the cooperative effort to help pineapple producers to launch the “Pun Sook Pineapple” campaign, and launch the pineapple convoy to deliver pineapples to field hospitals and prisons in the Bangkok Metropolitan Area, and Central and North regions, sponsored by Bangchak Corporation Public Company Limited through the efforts of the Chiang Rai Commerce office and Pracharath Rak Samakkee Chiang Rai (Social Enterprise) Company Limited to address the effects of COVID-19 on Phu Lae pineapple producers following the request by the abbot of Huay Pla Kang temple for help to address the limitations on transporting the produce outside of the area resulting in the oversupply.

Prajob Prachsakul, Chiang Rai Governor, stated that the “Pun Sook Pineapple” campaign, in which Bangchak purchases pineapples to be distributed to medical personnel and patients in field hospital and inmates in prison, is a holistic approach to the problem, and is a good example for the private sector and civil society in conducting CSR activities that take a multi-perspective approach.

Chaiwat Kovavisarach, President and Chief Executive Officer of Bangchak Corporation Public Company Limited, stated that Bangchak has always have a corporate culture of “sustainable innovative business development in harmony with the environment and society.” The Company helps affected Thai farmers by buying agricultural products to use as marketing gifts through its service stations, which has been a hallmark of the business for more than 20 years, as well as finding distribution channels for the prducts. The “Pun Sook Pineapple – Combating sickness through vitamins” will buy Phu Lae pineapples from producers in Chiang Rai affected by CVOID-19, both fresh and processed, totaling 43 tons, and distributing the pineapples to patients in hospitals, field hospitals, as well as prisons in the Bangkok Metropolitan area, Central region, and 9 Northern provinces.

Pineapples are rich in mineral and vitamins such as vitamin C, vitamin B, potassium, phosphorus, etc. and has beneficial and preventative qualities in treating flu symptoms.

Nuttaporn Mahapaibul, Chiang Rai Commerce Office, stated that the COVID-19 outbreak caused a marketing problem for agricultural goods, including pineapples, lychee, longan, santol, pomelo, and rambutan, which the provincial commerce office has a campaign to connect affected producers with provincial commerce office throughout the country. In assisting Phu Lae pineapple producers following a request from the abbot of Huay Pla Kang temple, Chiang Rai Province, seeking the assistance of the provincial governor regarding the inability of producers to ship outside the province, a coordinated effort between related agencies and the affected producers to find a solution with the provincial commerce office and Pracharath Rak Samakkee Chiang Rai (Social Enterprise) Company Limited to connect new market opportunities. This was supported by Bangchak’s “Pun Sook Pineapple” campaign to help affected producers, whereby following the governor’s press conference, a convoy will disembark to designated target areas.

Dr. Viroon Kumpilo, President of Pracharath Rak Samakkee Chiang Rai (Social Enterprise) Company Limited, emphasized the cooperation between all sectors in helping society and should focus on a holistic understanding of the problem such as Bangchak’s “Pun Sook Pineapple” campaign. From Pracharath Rak Samakkee Chiang Rai seeing the problem caused by the COVID-19 outbreak, inclulding producers of Phu Lae pineapples, the infected, the caregivers, and the medical personnel of have sacrificed so much to care for patients in field hospitals, and other related agencies. A proposal was sent to Bangchak, which was prepared, in terms of a corporate culture that focuses on sustainable green business and social welfare, and was readily accepted. Thus, a press conference was proposed to communicate the model example to other businesses, civil society, and other agencies in conducting genuine CSR activities and initiatives. 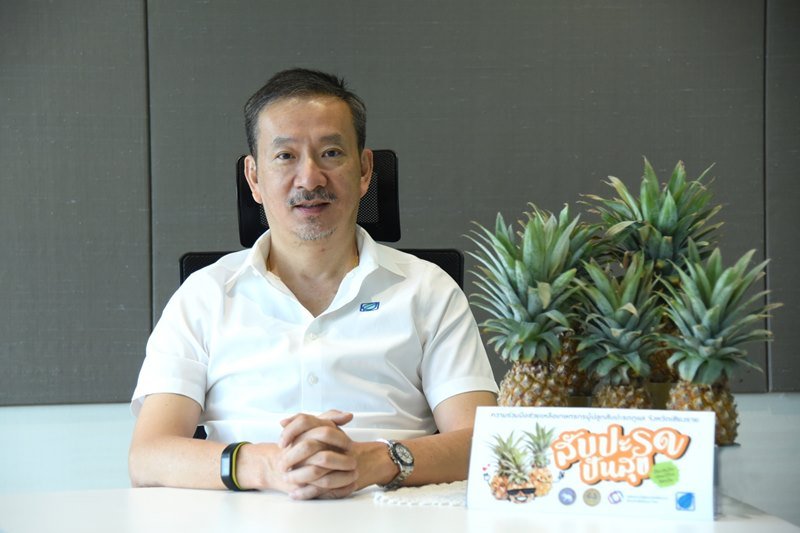 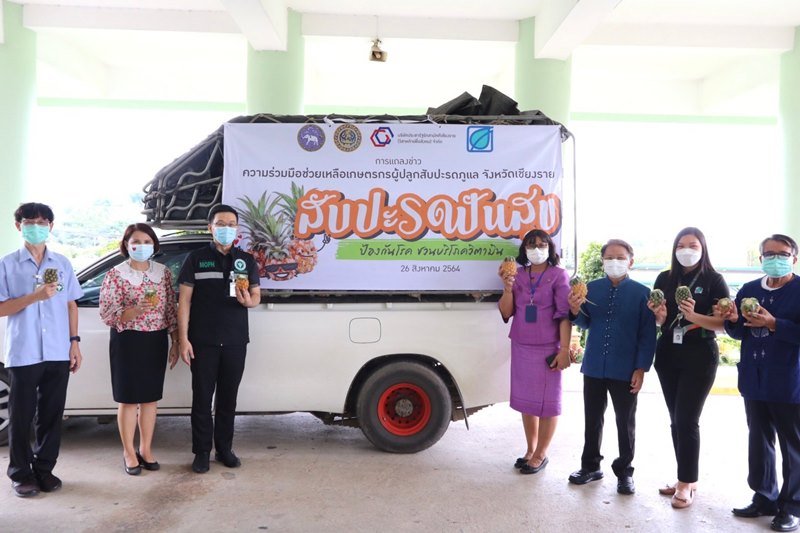